Congratulations to Rich Casale on 40 Years with NRCS 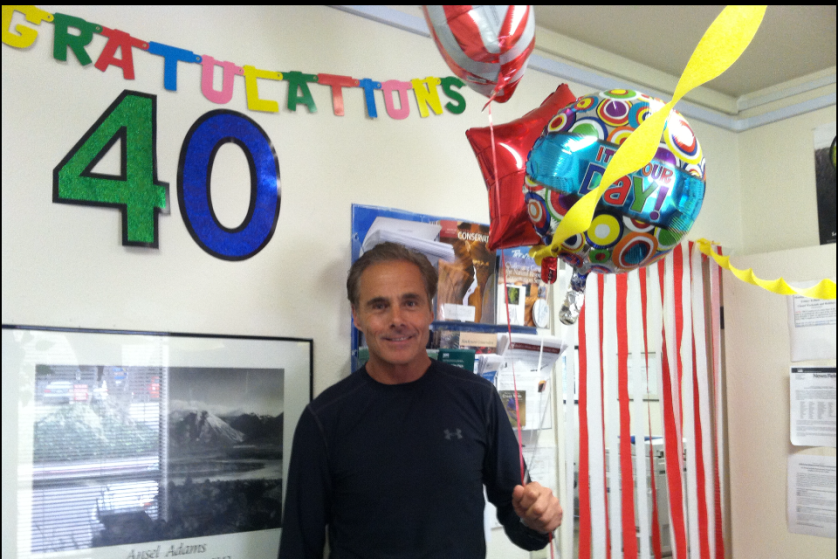 “After 40 years with NRCS, I feel like I’m just getting started,” says Rich Casale, District Conservationist with the USDA Natural Resources Conservation Service (NRCS) in Capitola, California. He adds, “Honestly, I don’t even think of retirement, in fact, I feel like I have more to offer now than any other time in my career.” Rich is now one of the longest (not oldest) serving NRCS employees in California, an agency with more than 400 employees statewide.

When Rich walked into the Santa Barbara field office on June 17, 1974 to report for his first day of duty, the office staff didn’t know he was coming. They were so unprepared that they gave him policy manuals to read his entire first day on the job. In April 1975, as a young soil conservationist, he transferred to the Salinas office, which at that time served both Monterey and Santa Cruz County. Later that same year he started working out of an NRCS area administrative office that was located in Watsonville in order to better assist Santa Cruz County growers and conservation districts. During the next three years he assisted four local conservation districts helping them to reorganize their territories, and allowing the formation of the Resource Conservation District of Santa Cruz County in February, 1978. By May of 1979, NRCS opened a full-fledged field office to exclusively serve Santa Cruz County. Rich was selected to serve as the first District Conservationist for the newly established office and still serves in that capacity 35 years later.

Rich has had many other work experiences during his career, including several emergency details to other areas of the state following fire, storm, and earthquake disasters. He has always considered himself “a field District Conservationist” because he says, “I do my best work in the field working face-to-face with landowners and conservation partners and not by staying in the office or behind a computer.”

Over the years, Rich has helped forward erosion control and conservation programs at the local, state and national level developing programs and speaking to NRCS audiences and other professional groups throughout the country. One of his proudest accomplishments was co-founding the international Certified Professional Erosion and Sediment Control (CPESC) program back in 1981. Today, there are nearly 5000 CPESCs in 13 countries worldwide.

He is also proud of his work with the NRCS Earth Team Volunteer Program, having signed up the first three official NRCS volunteers in the nation in 1981. Rich has given scores of young people volunteer work experiences throughout his career. In fact, in the last 33 years there hasn’t been a year where Rich hasn’t had at least one volunteer by his side. In 2010, he received a national USDA award in Washington DC, for his career work with volunteers and for pioneering volunteerism in the agency.

In 2008, he was honored as the recipient of the Santa Cruz County Farm Bureau’s Friend of Agriculture Award with official resolutions and formal congratulations from the Governor, State Legislature, U.S. Congress, City Mayors, and the Boards of Supervisors from Santa Cruz and Monterey Counties.

There have been many other highlights over Rich’s 40 year career. Rich says, “At the end of the day it always seems to be about what I do and who I do it for as an NRCS employee. I believe the NRCS motto sums it up all too well: Helping people help the land.”

Rich is a graduate of Humboldt State University. Outside of the office he loves traveling, playing golf, jogging, wood working, wine tasting and practicing conservation on his own small horse ranch in Aptos, California along with his wife of 34 years.

When we asked Rich how much longer he intends to work he replied, “I have no immediate or near term plans to retire. I only look forward to working many more years for NRCS because I love what I do. After all, why on earth would I stop doing something that I love? Heck, I could do another 10 years in my sleep.”